Video on the "No Future Without Us"-Tour 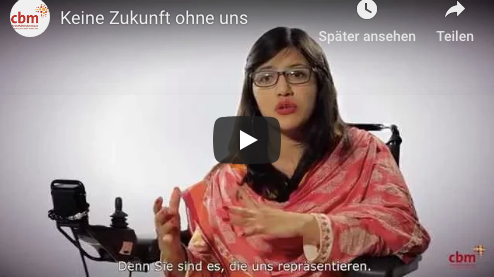 From 20 to 29 April 2015, Abia Akram of Pakistan (CEO - National Forum for Women with Disabilities), John Paredes from the Philippines and Kudakwashe Dube from South Africa (CEO of Africa Disability Alliance) met with parliamentarians in Germany, the EU as well as EU Member State Representatives. Their commitment to equal rights and opportunities of people with disabilities worldwide is what unites the three. They want to convince politicians in Berlin, Brussels and Strasbourg to work for inclusive development goals and to ensure full participation of persons with disabilities in the post -2015 agenda.

John Paredes from the Philippines says that persons with disabilities face many challenges worldwide. "Blind people are often illiterate. The discrimination by public authorities is commonplace.” John is blind, and currently works at the Saint Louis University where he trains teachers about inclusive education, while continuing working on his doctoral thesis.