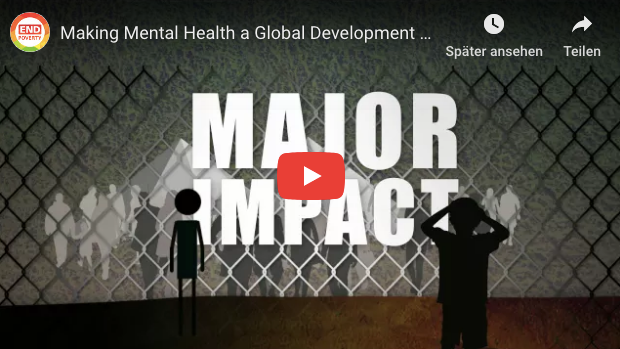 For the past 15 years, the global impact of mental illness has been increasingly well recognised. This has been well documented both scientifically (for example carefully measuring the disability attributable to mental illness – around 32% of total years lived with disability), and in terms of greater awareness of the appalling human rights abuse experienced in many countries.
During this time, the evidence for effective interventions has also become stronger, with a growing consensus on good practice, even in the most challenging settings, and in emergencies. For very good reason, the global health agenda has been dominated by campaigns to address communicable diseases (TB, malaria, HIV/Aids), to promote vaccination, and by a focus on maternal and child health. Mental illness is very far from being prioritised in this way (despite causing an equivalent amount of disability). Development funds for mental health are typically less than 1% of health budgets (for example in DFID or USAID, though quantifying this is difficult because expenditure on mental health is usually not measured).
The Global Mental Health community has been working hard to change this neglect. The #FundalMentalSDG campaign (which CBM supported) contributed to a greater prominence of mental health in the Agenda 2030 SDG documents. This meeting, hosted by the World Bank with the support of the WHO, was a key milestone in presenting mental health as having an essential contribution to make to global development.

Research carried out for the meeting found that for every dollar spent on mental health in development, four dollars was gained to the economy. By 2030, the world economy will have USD6 trillion a year lost to productivity due to mental illness if nothing is done.

An intense week of activities

At the high level panel discussions at the World Bank building, the President of the World Bank and Director General of the WHO both spoke, explaining their commitment to seeing mental health gaining further support in future. The opportunity of having mental health highlighted in a meeting with many key global figures in politics and finance was crucial in raising the profile of mental health. In addition to the events at the World Bank, the week attracted a number of other side events. On the first day, Carmen Valle, CBM’s Mental Health Advisor who has just left Sierra Leone after spending the last years developing services participated in an ‘Innovations Fair’ where she described CBM’s partner programme supporting the mental health and psychosocial support through the Ebola epidemic.

Other meetings included a day discussing the growing body of research around innovative services run by the (US) National Institute of Mental Health and Grand Challenges Canada. I spoke at this event about the importance of the often neglected issue of how mental ill health and disability interact. For example, people with sensory impairments have a higher prevalence of mental illness, but services are often not accessible and do not address their needs. CBM and the International Agency for the Prevention of Blindness (IAPB) reaffirmed their commitment to ensuring that their services continued to lead the way in this area.
Another day focused on strengthening our understanding of how culture and mental health interact. Global Mental Health has been, since its inception, conscious of the importance of recognising the importance of embracing culture and difference local approaches to mental health and illness. Its practitioners have also come from a range of backgrounds from social to medical, and a comprehensive approach has been promoted from the outset. This was demonstrated by the range of participants in these meetings.
The week was an opportunity to meet many of the most important actors in Global Mental Health and it really felt like the movement was coming of age, proving its capacity, and preparing for a new level of engagement in global development. It was great to see CBM playing a role in this, and motivating to build on what has already been achieved.
The full report can be read here