Kenya is on its way to becoming a pioneer in terms of inclusive education. Kenya has passed a new policy aimed at making education accessible, so that all children with disabilities can go to school. This includes providing space, resources and training in mainstream schools so that children with and without disabilities can learn alongside each other.

Fredrick Haga had to leave school when he began going blind at 16. Seven years later—with the help of CBM—he went back to school and is now the acting Director, Special Needs Education in the Ministry of Education in Kenya.

In the following video interview with Deutsche Welle, Fredrick explains his own education experience and how and why the Kenyan government plans to implement the policy for inclusion on trainees and learners with disability. 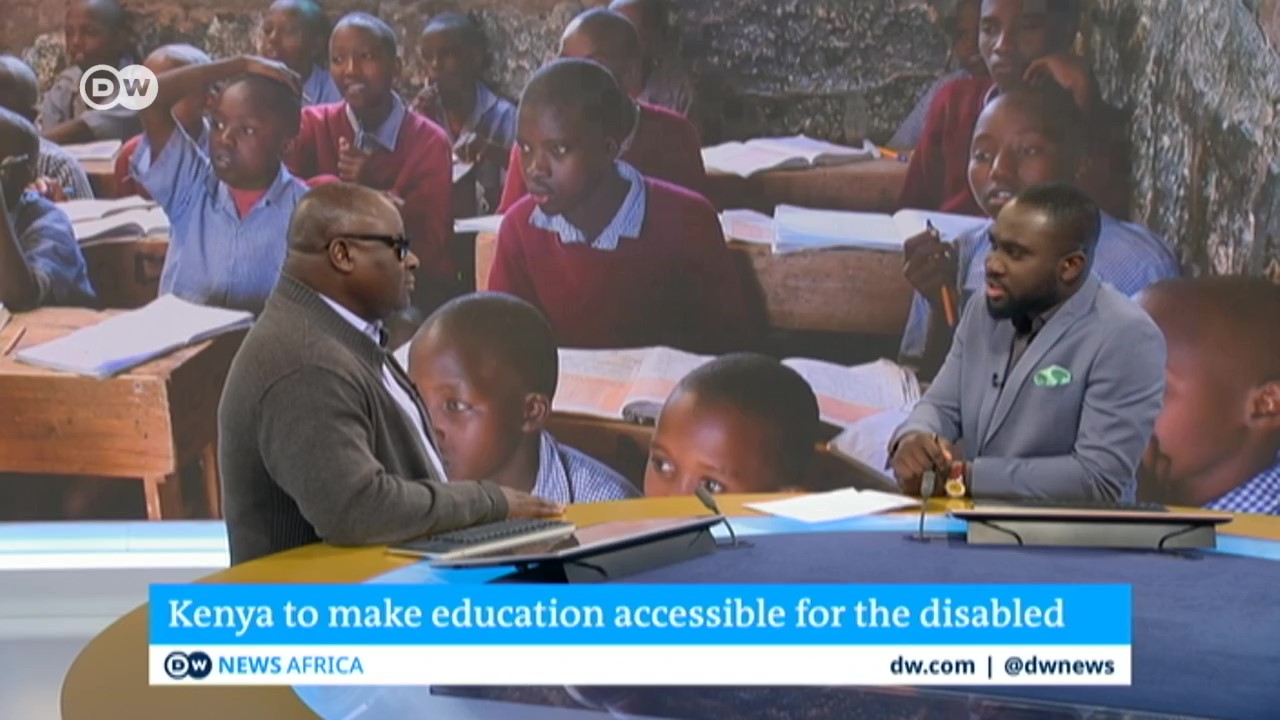 >>EDDY: To talk about this, I’m joined in the studio by Frederick Haga from the education ministry in Kenya. Thank you for your time, Mr. Haga. You were 16 when you lost your sight. How did that affect your education?

>>FREDERICK: I had to drop out of school that time because the levels of knowledge at that time were a bit low, and we didn't know that I could continue with my education. So, I had to leave school seeking treatment and adjusting to the situation of being visually disabled. So, I stayed out for about 7 years.

>>EDDY: How difficult was that?

>>FREDERICK: That was quite difficult--actually--because it was moving from a situation where you can see, to one where you are not able to see; so that affected my life completely.

>>EDDY: Now what's the scope of the problem in Kenya? It must be definitely a big issue as we’ve looked into it.

>>EDDY: Now, are there different policies for different disabilities?

>>FREDERICK: No. We have what we are calling the sector policy for learners and trainees with disabilities, and that targets all disabilities.

>>EDDY: The Kenyan government has put this new legislation into place. What does it hope to achieve, and how?

>>FREDERICK: The policy aims at making sure that all children with disabilities are able to go to school--and not necessarily go to special schools. We are opening space in the mainstream schools so that children are able to learn alongside their peers without disability.

>>EDDY: And what kind of challenge do you envisage?

>>FREDERICK: The policy is really revolutionary, and implementing it requires quite a bit of planning, expertise and resources. We hope that we will be able to provide all that mainly from government revenue, but also working with partners to address some of the issues that have been identified as barriers.

I could just give an example just to show that we've been working with partners. We’ve just been implementing a project with CBM, and this is financed by the Italian Agency of Development Corporation, and we hope to build on such partnerships to make sure that we are able to address all these barriers that have been identified to preventing children from going to school.

>>FREDERICK: It's gone down very well because this was a policy that was developed in partnership with both governmental and non-governmental organisations. It considers the principle of leaving no one behind, especially children with disabilities, that is in line with the SDGs [Sustainable Development Goals], and it's also in line with the Convention on the Rights of Persons with Disabilities. So it’s a very progressive policy and the reception has really been good. But, of course, for us as a ministry, it's not just about the policy but it's about the implementation. And we’ve planned for that for the next five years.

>>EDDY: How or why is it so important that these kids are not left out?

>>FREDERICK: Oh, yes. Because, first of all, these children are just like any other children, and it is a human rights issue that all children in Kenya access education. It is the business of government to ensure that children--regardless of their vulnerabilities--are able to access education because it is their right that they access education. Remember the broader principle that I’ve already mentioned of leaving no one behind. So we definitely cannot afford to leave children with disabilities behind.

Fredrick mentions that the Kenyan ministry is working with partners, including CBM.

CBM is currently implementing two education projects in Kenya in cooperation with the ministry that support the new policy:

'No one out' project

This project, financed by the Italian Agency for Development Cooperation and implemented by a consortium of NGOs of which SVI (Servizio Volontario Internazionale) is the main applicant, aims to lead to inclusive education and save incomes. Sixty per cent of Nairobi’s population live in slums and 50 per cent of youth and young adults (aged 15 to 24) are unemployed. Poverty and unemployment are particularly a problem for children with disabilities.

Within the first year of this project, 74 children and teenagers living in five slums of Nairobi, who were not going to school and (if older) did not have any income, were referred to schools, job trainings and other institutions in collaboration with Kenyan authorities.

The project is currently active in 16 schools and impacts 110 students with disabilities. CBM and its local partner train teachers to develop individual curriculums for each child as well as individual action plans for each school.

The project supplies materials, such as sign language alphabets and touchable clocks to learn about time and puzzles.

The project works to raise awareness among school directors and board members on the needs of children with disabilities and how they can be supported. Even security guards and kitchen staff, along with school staff and fellow pupils, receive barrier training.

Additionally, the children with disabilities receive medical care, which includes receiving a hearing aid, glasses or a wheelchair if needed.

The plan is to double the number of schools supported by the project within the next two years and to provide job trainings and training on developing business plans.

This project supports the Kenyan government in implementing its new inclusive education policy.

CBM and its partner the Agency for Disability and Development in Africa (ADDA) will offer 100 children with disabilities in Machakos, Kenya an inclusive education.

This project involves five disabled persons’ organisations (DPOs) and special needs institutions to advise on the special needs of persons with disabilities. Special need centres prepare children to receive an inclusive education. For example, children with visual impairment learn braille to be able to able to read and write.

The project ensures that no one will be left behind by involving many stakeholders and has tasked the ADDA and the DPOs to raise public awareness that children with disabilities have the right to go to school and that everyone benefits from an inclusive school environment.